Fromagerie Bergeron is pleased to announce that for the third year running its latest creation has won a prize among the best cheeses at the 2017 Sélection Caseus cheese contest.

With 226 cheeses from 31 Quebec cheese makers, there were a record number of cheeses presented at the 19th edition of the contest. Prizes were awarded on Tuesday, September 12, 2017, at the Musée de la civilisation.

Fromagerie Bergeron’s Louis Cyr cheese, its strong cheese, won a prize in the interior-ripened cheese without ripening holes category for the third year in a row. The Louis Cyr was awarded the Silver Caseus in 2015 and the Bronze Caseus in 2016. It also won the top prize for firm cheese in its category at the 2016 British Empire Cheese Show. The cheese has a subtle umami flavour and is made from milk carefully sourced from farms that partner with the cheese maker. The results speak for themselves—the Louis Cyr keeps winning!

Four of Fromagerie Bergeron’s cheeses made it to the finals at this year’s contest! A third of its cheeses were nominated, including Le Fin Renard, Le Coureur des Bois, Bergeron Classique and Louis Cyr.

The cheese maker was proud to see the Bergeron Classique, the first of the line, also nominated for top honours! Fromagerie Bergeron created its logo in honour of the cheese’s unmistakable red wax. The Coureur des Bois’s unique appeal is owed to evenly distributed cumin that complements its flavour perfectly. Le Fin Renard, created by Mario Bergeron, satisfies the taste buds with an earthy mushroom flavour. It is encased in a delicious washed rind instead of wax.

The company is proud to have distinguished itself amid numerous cheeses of such a high calibre. With these new nominations, Fromagerie Bergeron’s commitment to produce high quality cheeses has been reaffirmed.

The brothers, Mario and Roger Bergeron, and all the staff are very proud to receive these honours that highlight the Fromagerie’s ability to make cheeses in large volumes while retaining the quality of artisan products. 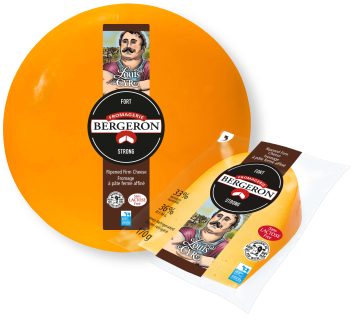